THE ILLUSION OF INEVITIBILITY
When somebody tells you Hillary has the nomination all sewn up, tell them to shut the hell up. And then direct them to this:

That said, from what I saw of last night's debate, Hillary (with CNN's help) mopped the floor with her rivals. 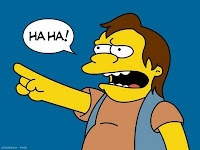 Since this is the week MLB announces the player awards such as Rookie of the Year, MVP, etc, I thought I'd announce my Baseball Nelson Awards. The first "Ha Ha!" goes to the recently-indicted Barry Bonds. Good luck adding to your HR record if you now have to hit the ball over razor wire... And the "Agent of the Year Award" goes to Scott Boras who cost his be-lipsticked douchebag client thirty million dollars and himself a commission. Actually, maybe ARod came out ahead on that deal...


WANTED: CELLMATE
Remember the Florida State Rep. that was arrested for soliciting a male cop for sex in a park bathroom? You know, back when that sort of thing was all the rage among GOP officeholders (ie: summertime)...and he came up with the best/worst excuse ever*—claiming that since the cop was a "stocky, black guy" he became so frightened he thought he better offer the guy $20 and a blowjob? Well, the still-in-office Rep. Allen had his day in court and was convicted. How "frightened"/aroused would Allen be if they put Barry Bonds in his cell with him? [h/t: The Legal Satyricon]

UPDATE—Bonus humiliation for Allen: "Because of the nature of the crime, prosecutors said, Allen would have to undergo testing for sexually transmitted diseases. The results, they said, would be made public." That seems a bit excessive. Hilarious, but excessive.


OUCH.
Canada doesn't fuck around with their Public Service annnouncements. Check out these workplace safety PSAs. [Warning: Some are extremely graphic.] Restaurant and Construction, Retail, Warehouse.
Posted by Mr Furious at 2:39 PM

That poll is so depressing. I still cannot understand where Kerry came from. I just remember his stupid smiling mug showing up during the early primaries with "WINNER" beside it again and again and thinking "NOOOOOOO!!!!!"

Wow, you snuck your comment in while this was still a work in progress...

(I never see any of mistakes/ommissions until I hit "Publish")

Did you catch that Daily Show link i added?