Restoring integrity to a damaged and overly politicized Department of Justice... 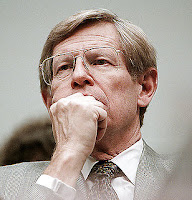 President Bush is expected to choose a replacement for Attorney General Alberto R. Gonzales by the middle of next week, and former solicitor general Theodore B. Olson has emerged as one of the leading contenders for the job, according to sources inside and outside the government who are familiar with White House deliberations.

[...] The persistent mention of Olson as a possible candidate has surprised and upset some Democrats, who view the well-known GOP attorney as a sharp-edged partisan who they contend would not be the best choice for a Justice Department accused of becoming overly politicized.

"A lot of Democrats up here would view that as a shocking and unwise choice," one Senate aide said.

But Olson, who represented Bush in the legal battle over the 2000 presidential election, also is widely admired by members of both parties for his legal skills and sharp intellect.

...by nominating Reagan's lawyer during Iran Contra, a major player in the "Arkansas Project" which dug up dirt on the Clintons in the 90s, worked for the Starr Investigation, and finally, was the lawyer who represented George W. Bush in Bush v. Gore—putting Bush in office.

Oh, and while Solicitor General for Bush, he argued cases for the Administration on terrorism, wiretapping, PATRIOT Act, detainees and everything else that could possibly be a conflict of interest.

Sounds perfect. The only way Bush could be a bigger dick would be to nominate Karl Rove.

Place your bets in the comments on whether he ends up being the nominee, and whether the Dems block him. And if they actually DO block him (doubtful) Bush will recess appoint him. Where's my money? Read the title again...I'd LOVE to be wrong.

UPDATE: I neglected to mention this originally, Olson's wife was killed in the 9/11 attacks (I believe she was on the Pentagon plane). I'm sure the Bushies regard that as a trump card and insulation—I regard that as a conflict of interest, and possible impact on objectivity and judgement. It would keep you off a jury, why shouldnt it prevent you from this job? Answer: It should. But there is NO chance any Dems will go there.
Posted by Mr Furious at 10:55 PM

Bush will continue to do whatever the hell he wants . . . and the Dems will do nothing to stop him.

If Bush picks Olson, which would figure, I think your crystal ball laid the rest of the story out well.

BTW, what would you like to bet that if someone had been tracked down and arraigned for those anthrax mailings to Leahy and Daschle, and if that suspect had then been connected to high-up Republicans, Olson would've been called on to defend them?