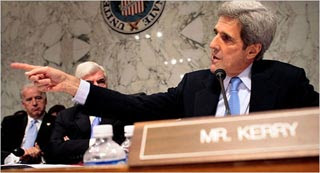 During his confirmation hearing for Ambassadorship to Belgium, nominee Sam Fox got set up, and then just lambasted by Sen. John Kerry. Seems once upon a time, this Fox clown gave fifty large to the Swift Boat Veterans, and Kerry's got something to say on the matter.

You can see the "Oh, shit" moment on Fox's face once he realizes where this is going. He squirms like a fish, denounces 527s, calls Kerry a hero and then claims "But the other side compared Bush to Hitler!" (complete crap, by the way). His ultimate defense? He's so rich and successful that he gives away money to so many causes he can't remember each one—even one that's $50,000.

Watch Kerry get his pound of flesh [video at Crooks and Liars]
Posted by Mr Furious at 9:33 PM 2 comments:

Good reasons to sit through a brief web ad (in no particular order):

SALON'S GARY KAMIYA TAKES A STAB
AT HILLARY'S "APOLOGY" SPEECH
Hillary should apologize or at least better explain or justify her position on the War and her vote for it. Admitting a mistake can be the hardest thing a politician ever does, and Clinton has been so resistant, it will be nearly impossible for her now.

Anyway, Kamiya's column is a scathing hypothetical self-critique by Clinton. something most people, never mind pols would be incapable of doing to themselves publicly. But it is well worth reading, and articulates perfectly why I don't want her to be the Democratic nominee.

LINDSAY "MAJIKTHISE" BEYERSTEIN
IS SMARTER THAN AMANDA AND JOHN EDWARDS.
A fascinating look at how Edwards offered the job to Lindsay first, and why she turned it down. Oh, and it also offers a glimpse of why I don't like Edwards much either. You, like me, may have avoided all of these "blogger controversy" stories—you should read this one. Also included, Jim Webb is smarter than John Edwards too.
Posted by Mr Furious at 9:04 AM 3 comments: 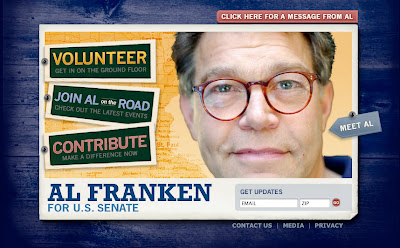 Those are the words that crossed my lips after watching Al's announcement. He will win that race by a huge margin. The political climate has never been more ripe for a candidate like him, and Minnesota is the place for it to happen.

Oh, and yes, that is the best-looking political website ever.

UPDATE: Okay. Talk about flying off the handle. Reading that post the next day is almost embarrassing. That post should make it obvious that I hoped Franken would run. I think he'd be a hoot in a campaign, but I really believe his presence will be beneficial and cathartic to the process. Plus, I really do believe he'd be a great Senator. And God knows the Democrats really need somebody with some personality. But in all seriousness, watch the video and tell me how he won't be a compelling candidate. He is sharp, insightful, personable, and obviously funny—but perhaps most importantly self-deprecating and genuine. He really is a breath of fresh air from politics (and politicians) as usual. Certainly there are Republicans who won't take him seriously because he's a comedian, but this isn't Howard Stern running for Governor, this is real. Certainly progressives will love him, Democrats will get behind him, and I see independents/undecided voters flocking to him as a change of pace.

Minnesota, after all, did elect "The Body."

I don't know who might oppose him in the primary, and what that means for Franken's realistic chances of advancing, but in the eventual matchup against Norm "the Rick Santorum of 2008" Coleman, I think Al will win going away.
Posted by Mr Furious at 1:05 AM 1 comment:

The Best Kind of Busy

In case anybody's been wondering where I've been, I'm right here enjoying the latest addition to the family... Mom, Dad and big sis Ruby are all doing great. I'll be around as time allows and the mood strikes me.
Posted by Mr Furious at 12:53 AM 4 comments:


A civil war in the GOP over the civil war in Baghdad. Scarborough is livid. Watch.
Posted by Mr Furious at 2:27 AM 1 comment:

Who's Idea was Michigan?

Just got finished walking the dog. I don't have one of those old-timey thermometer things—I gotta go online to find out how freaking cold it is...

Apparently "holy shit" and "it's cold as a motherfucker" equals a windchill of minus 18.
Posted by Mr Furious at 1:00 AM 1 comment:

Brilliant parody in the style of Ken Burns.
Posted by Mr Furious at 11:52 PM No comments: