The fact that I can hardly get worked up about the War, among other topics, anymore due to Outrage Fatigue won't stop me from letting somebody else point out what crap Bush's "address to the nation" was. Take it away, Hilzoy:

In a move that caught all of Washington by surprise, President Bush announced tonight that he will begin drawing down troops at almost exactly the rate that he must draw them down unless he is prepared to extend troop rotations or institute the draft. In another startling move, he described this drawdown not as forced on him by deployment schedules, but as a "return on success": the tremendous success of the surge. In so doing, once again, our President shows himself to be a true visionary: seeing things invisible to ordinary men and women. Where we see only a country in the process of falling apart, our more discerning President sees success. Where we see millions of people fleeing their homes, he sees 'civil society taking root'. And, somehow, he sees "a young democracy" where we see dead people.

And to top it all off, where we see a President determined to keep our troops in harm's way for as long as possible, hoping that the civil war unleashed by his folly will unfold on someone else's watch, he sees a chance, "for the first time in years, for people who have been on opposite sides of this difficult debate to come together." Although why he thinks this is so novel escapes me: it has always been possible for both sides to come together if all those who disagree with George W. Bush simply abandon their positions, and this is not the first time he has suggested that we embrace this sort of bipartisanship.

The President also said this:

"In the life of all free nations, there come moments that decide the direction of a country and reveal the character of its people. We are now at such a moment."

Here, for once, I agree completely. We have had clear evidence that our policy in Iraq is unworkable for some time. We need to decide what to do about it. And we have, essentially, two choices. On the one hand, we can face up to this fact, as unpleasant as it might be, and figure out the most honorable way of extricating ourselves. On the other, we can continue to defer the moment when we have to realize that we have failed, and go on sacrificing good and decent men and women to our unwillingness to face the truth.

This will, as President Bush says, reveal our character as a people. I would much rather it reveal some capacity for maturity and decency than a willingness to ask people to die so that we can pretend we haven't lost.

Following up on the President's quote above...This is actually the only part I saw (after the fact, online) and I had to stop it right there before I hurt my pretty new monitor. What the fuck to you mean "we", white man? Whatever has been happening in Iraq, and what comes next has no reflection on this country or the character of its people. The rest of us left you and your retard-base and your fucking abomination of a war in the dust quite a while ago.

Your "moment of truth" is nothing but a bullshit soundbite in your vast narrative of lies. you are pretending to bring troops home, when all you are really doing (and not even committing any numbers, btw) is going back to the same unacceptable number of troops we had before this stupid surge. 2008 will end with the same amount of troops that 2006 did.

Last night's speech was the same as any of the other ones—you continue to fool all 28% of the people all of the time, cow Congress into supporting you, and punt the ball down the field and expect the next President to deal with your fucking mess.

Nicely done. You are full of shit, but it's working. That is your only success—your brain-dead supporters clap, the morons in the media trumpet your "compromise," the Republicans point to this fake success, and the Democrats roll over for whatever you want.

Fuck you, Mr President. And fuck the rest of you too. In fact, you can all suck down one of these... 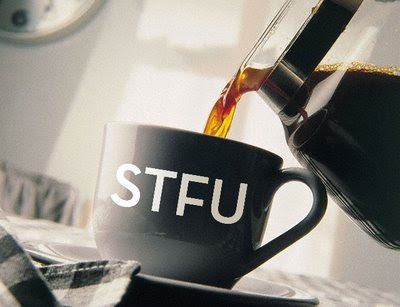 Has to be Trelane, right?

Second guess would be Q.

"You" = the GOP, the 28 percenters, Dems in Congress and the media.

You're on the right track...but no, neither of those two.

"You" = the GOP, the 28 percenters, Dems in Congress and the media.

Ah. That wasn't entirely clear. For a minute, I was thinking, damn he's cranky today.

You're on the right track...but no, neither of those two.

NO! Waaay too obscure.

You're gonna hate yourself when it's revealed...

Actual quote from the script (as opposed to my memory):

"I grow fatigued again. With your permission, Captain, I will return to my quarters..."

Sarek? Has to be Sarek. It was the "with your permission" that I was missing.

Wrong again. Do you need a clue?

"A superior woman. I will take her."