What's Wrong With This Cover? 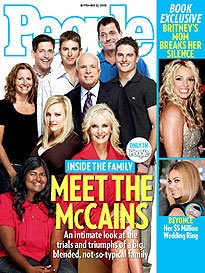 Let me help you out. Pretend you walk up to a newsstand. You're looking for the new issue of People. There it is, right there in the rack. The rack that covers the bottom portion of the cover. And who is placed inexplicably low on the cover? The McCain's adopted daughter Bridget. WTF?

I have been a magazine art director for 15 years, and I can tell you with absolute certainty that this was a deliberate decision by the magazine. Nothing gets more attention than the cover, and there are a host of people that weigh in on even the tiniest of details.

For each and every cover, the prioritization and placement of text and every important element takes into account the newsstand rack, the mailing label, you name it. Nothing is placed anywhere without a reason and careful consideration.

The art director, editor and photographer determined that the "MEET THE McCAINS" copy could afford to be placed low because PEOPLE generally gets prominent placement and is often unobstructed. And in racks where it is partially obscured, Cindy and John McCain are instantly recognizable.

This was probably one of dozens of shots taken, and one of multiple arrangements of the subjects, but I cannot think of any reason why any of the shots would have included putting an adult on a foot-high riser.

But the decision to place Bridget, of all the children, that far down is simply awful. It would be questionable to place anyone sitting that much lower than anyone else, but the fact that they chose her, and the likely reason why is what's disgraceful.

It is straight-up racism. Now, I'm not implying that this is the result of racist actors, but race IS the reason. She was deliberately minimized on the cover with certain elements of the public in mind. The fact that she is blocked on some racks is a bonus to them for their decision to isolate her from the family to start with.

What they have done is relegate her to the spot usually reserved for the family dog.

There is no good reason she should not be placed one "head" higher. The only possible reason I can rationalize is that the decision was in part to give prominence to the chest of [minor celebrity] Meghan directly behind her. But that is not sufficient reason. If boobs were an element that they wanted to capitalize on, they simply would have moved Meghan slightly to the right and made sure Bridget was at the right height, but off Meghan's chest to the left.

So, my experience tells me it was no accident that they chose to run with a shot with the "different" child banished to the lower corner, and it is a fucking disgrace.

For the record, this is all on People. I don't have any reason to attribute any blame to McCain. Hell, as was pointed out in comments elsewhere, John and Cindy might even've thought "Hey, Bridget's right there in the front row!"

UPDATE: Still the Palin cover at the CVS around the corner. Why did they use a shot of the baby asleep? Now I have to question if it is to minimize his Downs appearance.
Posted by Mr Furious at 7:45 PM

Yes, it does look bad, and I'm the last person to read significance into this kind of stuff. Also, notice(as I'm sure you did) how the rest of the family makes a kind of circle around John, so they're all connected, oh and who's that down in the corner? I would imagine that most adoptive parents are really sensitive to these issues of inclusion and exclusion regarding their adopted children.

And I was thinking that the title of this post should have been "One of these things is not like the other" because that sure seems like what they're suggesting.

Oh, c'mon Furious. First of all, it's People so who gives a shit?

Secondly, I'm gonna posit that one reason she's down where she is is because she's not very attractive. (Sorry, but let's try to be honest here). I suspect that's more at issue than her color.

If she was Indian, and dark . . . and hot, I can guarantee she'd be as prominent as the white daughter's tits.

I didn't even notice she was there until I finished your first paragraph and went back to look at what you were talking about.

The new issue is in the CVS this morning when I bought half & half. The rack (semi-transparent) cuts straight across at the top of the "MEET THE", which bisects Bridget's head. And her hair is the same color as the two shirts behind her...another wardrobe gaffe.

As an adoptive parent, I had more of an issue with how the McCain's portrayed themselves as "saving" Bridget from a horrible life in Bangladesh. Let’s not be so ethnocentric people, instead let’s just try to be good parents to your kid. Its really not about you is it? It’s about giving a kid two parents.

The whole adoption story McCain talks about is just fishy. He talks about Cindy brining Bridget home and announcing her as McCain’s daughter. How in the hell do you surprise someone with a kid? My wife and I are currently working on our second adoption. We are adopting from Ethiopia. There is absolutely no way my wife could do this without me knowing. The paperwork is 2 inches thick, there are back ground checks, immigration papers, physicals, home visits and more. It just does not add up.

Bob, you didn't have Mother Theresa herself pushing the adoption...

Oh, that's right. That story turned out to be a lie as well. The story of going overseas to adopt a child isn't good enough on its own, the McCains have to embellish it like everything else.

They are fucking pathological.

Seriously? I suspect being a gazillionaire with international connections from charity work/drug-running and no qualms about cutting corners, Cindy could easily grease the process

Wait, maybe that's not McCain's adopted daughter after all... maybe it's just a Palin staffer who spent too much time in Sarah's tanning bed...

Oh, hallelujah. Someone who analyzes magazine covers as anally as I do.

People has a habit of pushing Bridget to the side. Here's a previous issue showing three generations of the McCain women. Oooops... we forgot Bridget!

As for Palin's baby, that kid sleeps a suspicious amount of time. I'm too lazy to do a Google search for images, but I swear I've never seen a still or video image of that child awake. Benadryl, anyone?

My wife saw the cover and came to the same conclusion as Mr. Furious, independently of this conversation.

Its not just us.