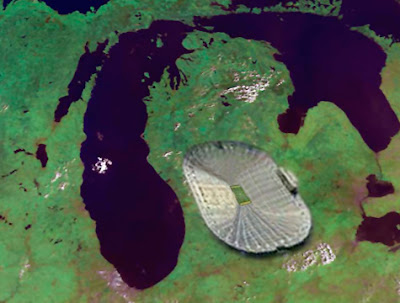 The University of Michigan is adding a big load of bullshit along with its luxury boxes to Michigan Stadium (aka "The Big House").

After tomorrow's loss to Ohio State, the 107,000-seat stadium will undergo extensive renovations including the addition of 85 luxury suites which (as this picture shows) are basically like two big office buildings along the sideline sides of the stadium.

So, what's the problem? Well, it seems the University has been skating by with "only 88 seats for the disabled, far short of the more than 1,000 that advocates say are required." That's pretty bad. For the record, the stadium is primarily bleacher seating and involves long-ass climbs down into the "bowl" to reach seats, and all services are around the perimeter outside. I could see how that sucks for a guy in a wheelchair.

The University is already battling lawsuits from disabled groups over this, but now the federal Dept of Education is threatening to withold funding for the University if this project doesn't remedy the situation. Good.

U-M makes the bullshit claim that "the original stadium bowl is being repaired, not renovated, and is not subject to A.D.A. rules set in 1990." That's crap. The University's own website on the $226 million project says as much.

That's the same kind of bullshit loophole crap utilities and refineries, etc. use to avoid pollution controls, etc and that shit pisses me off. But this is even worse—this is a state university. An educational intitution. A non-profit (in theory). Step the fuck up, U-M, and do what's right. Add the handicap seats or toilets or whatever and quit being greedy revenue-chasing assholes.

[main image from The Onion]
Posted by Mr Furious at 4:42 PM

Labels: assholes, football, Lloyd Carr parks in the handicapped spot at the mall

I couldn't immediately figure out what the hell that was a picture of. Initially, my brain flashed on the giant amoeba from The Immunity Syndrome.

Of course, I'm an equal nerd for knowing what you're talking about...