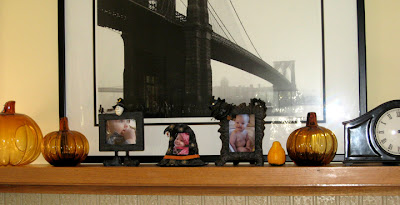 That's the current state of the Furious Mantle. You know what's missing? I mean besides photos of the second child? That's right—Weblog Awards.

Mrs F continues to hang tough in the middle of the "Best New Blog" pack, and I've called in just about every favor I can to drum up votes (ie: shamelessly shilled for votes in comment threads). Wherever she finishes, it's pretty damn cool that she made the cut as a Top 10 New Blog, period.

That said, we still want a top half finish, so go vote!

Here are my picks for some other categories:

BEST BLOG Malkin led this one for a while, but now everyone is getting their ass kicked by PostSecret which is a site I'd never heard of before. Apparently it's the "biggest ad-free site" on the web. People write down a secret on a postcard and mail it in. The site is updated weekly. Sorry. That's crap. Probably should have been in "Arts & Letters" or something. I've been voting for Andrew Sullivan, and Huffington Post has pulled ahead of Malkin for the silver.

BEST INDIVIDUAL BLOG None of these are blogs I frequent, hell I've only even heard of a few of them. Throwing Lindsay Beyerstein a bone here.

FUNNIEST BLOG: Not familiar with any of these,and not blown away with what I've seen.

BEST COMIC STRIP: Voted for xkcd. It's the stick figures strip you've probably seen. I don't know if it's the ""best" or not, but I've actually heard of it, and it's a block against "Day By Day".

BEST LIBERAL BLOG Hullabaloo. Digby is one of the best writers online. Period.

BEST CONSERVATIVE BLOG Also known as "Tastiest Dogshit." I'm actually boycotting this category since Balloon juice was inexplicably yanked from it—which would have been a tremendous upset. The excreable Malkin is currently leading.

BEST POLITICAL COVERAGE Talking Points Memo and Carpetbagger Report should be battling this one out. Neither are finalists, and I don't know any of these. Pass.

BEST CELEBRITY BLOG Wil Wheaton is running away with this one, even though he is clearly the farthest removed from fame... He deserves it.

The rest are like voting for school boards and judges...Hit Kissing Suzy Kolber for Sports, and scroll waaaay down-ballot for Balloon Juice for Top 250, and The Carpetbagger Report for 251-500.
Posted by Mr Furious at 1:18 PM

Labels: Mrs. F., telling you what to do, The sun never sets on the Furious Empire

good luck!!! My blog, My Marrakesh, is a finalist, too, in the category Best Africa or Middle East blog. Oh just a mere several hundred votes behind. sigh.