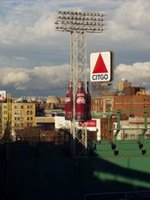 Growing up in New England, Citgo is subliminaly imbedded in the mind of every Red Sox fan. For years, the prominant fixture in the nighttime sky outside Fenway Park was the gigantic Citgo sign. Any home run over the Green Monster was an ad for Citgo—brilliant placement. I once worked at a full-serve Citgo station as a gas jockey. Now, there's a reason to seek Citgo out for your gas that goes beyond my own personal sentiments: None of their oil comes from the Middle East.

From a TrueMajority email I received today:

Of the top oil producing countries in the world, only one is a democracy with a president who was elected on a platform of using his nation's oil revenue to benefit the poor. The money you pay to Citgo goes primarily to Venezuela - not Saudi Arabia or the Middle East.

"Citgo is not just another oil company," says Citgo CEO Felix Rodriguez. "With Venezuela's state oil company, of which we are a subsidiary, we share a broad social mission." So buy Citgo gasoline and support democracy in South America:

And this winter Citgo is helping out less fortunate Americans, too.

You already may have seen the headlines about how Citgo, unlike every other oil company in the U.S., is making cut-rate heating oil available to struggling families in the Northeast. The Energy Department predicts a nearly 26 percent jump in heating costs this winter compared with last year, and despite a year of record oil company profits, the country's heating oil assistance fund is falling behind.

Citgo has stepped in to help out. They're selling heating oil at discounted rates to poorer communities in Massachusetts and the Bronx, NY, and working on deals to keep low-income homes in Rhode Island and Vermont warm, too.

Good eough for me. I usually try to buy BP gas, when possible and NEVER buy Exxon or Mobil, but I'll be looking out for Citgo as well now.

Click here to find the Citgo station near you.

photo credit: I grabbed it here
Posted by Mr Furious at 4:51 PM

If anyone from Bush & Co. drops in and reads that, I hope they've got a fresh Depends on.

Somehow, in Bush's screwy scheme of things, the prince of the kingdom from whence came 15 of 19 9-11 highjackers is a very good guy, while the democratically elected president of a Western democracy is a very bad guy.

As a bonus, buying your gas at Citgo is a poke in Pat Robertson's eye!

I had the same thought as you, SWA.

I was watching Lou Dobbs a couple weeks ago -- yeah, I'm a glutton for punishment -- and he referred to Hugo Chavez as a "the Venezulan strongman" and his government as "the regime." Funny, I thought he'd been democratically elected.