The hearings on the NSA domestic spying imbroglio are underway. Lots of folks on the left are gung-ho for these hearings, believing that this will damage the White House now, and by extension, Republicans this fall (after all the President ain't running again). That this is our chance to hold AG Gonzales to the fire and expose the WH and its illegal actions. That this is a terrific scoring opportunity for our side...

I'm not so sanguine about that result.

"But, no less than Committee Chair Sen. Arlen Spector as been full of outrage on the Sunday shows, and other Republicans (Graham, Coburn, Brownback) have grave concerns as well." This is a fucking act. Sound and fury, signifying nothing. These clowns roll for the White House every time. It's one thing to spout tough rhetoric on "Meet the Press" and another to do it in the hearing. When the TV audience is at work on Monday morning, it will be Party before Constitution from the Republicans without exception.

As far as the Dems, they are going to fail spectacularly, no matter what they do or try. Everyone keeps acting like the Republicans/White House "don't want these hearings." Bullshit. This is the perfect forum to underscore the seriousness Republicans assign our security (break a few eggs) and the Dems fecklessness (pussies worried about abstract civil liberites). Watch tonite's soundbites. The Dems should go forward, and hammer Gonzales because it's the right thing to do, but there will be no political benefit for the Dems as a result of this hearing. None.

I'd love to be wrong about that, but I don't think so.

UPDATE: By party-line vote (which Spector refused to even reveal) the Republicans are allowing Gonzales to testify without being sworn in under oath. At which point the Democrats should have gotten up and walked out of the hearing.

Picking up some things from other threads...

[from comments at Carpetbagger]: "...call centers that are now outsourced in "international" locations. Are these calls (which could cover anything from technical support for your laptop, to making vacation reservations, to discussing financial information, etc.) subject to the program?

People are making international calls all the time now without realizing it and many of those calls are routed to the same (or adjacent) part of the world the NSA is supposedly targetting/filtering.

MORE: Glenn Greenwald is doing a tremendous job live-blogging the hearings here. From his early remarks:

Of course Gonzales begins his Opening Statement by quoting Osama bin Laden and Zawahri. We used to quote Madison, Jefferson and Lincoln to decide what the principles of our Government are going to be. Now we quote Al Qaeda. The Administration wants Al Qaeda and its speeches to dictate the type of Government we have. It is the centerpiece of everything they do and say.

And anybody foolish enough to think this actually has anything to do with "The War on Terror" take a look at this: 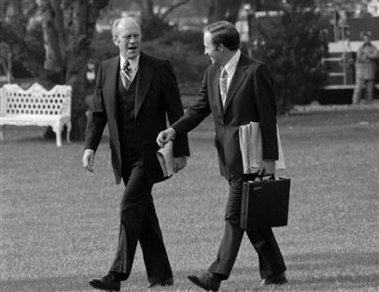 That's Big Time Dick Cheney who was after this kind of thing thirty years ago in the Nixon/Ford era. This is all about Executive Branch power and surveilling whoever the hell they want without oversight. All of this phony-ass "9/11 changed everything" is a load. They are merely using 9/11 as a pretext. And even that is a stretch, as they already had legal means to do everything they are claiming. They chose to go outside the law. The real question is, "Why?"

Will Dems effectively raise it? will the media cover it that way? And, will anyone care?
Posted by Mr Furious at 10:52 AM

Great post, Mr. F. Good point about the tie-in to the Nixon days with Cheney. He really seems to be the motor behind all this executive supremacy thing.

Your last three questions were probably rhetorical, but I'll answer them anyway: 1) Yes; 2) no; 3) Hell no -- American Idol is on!