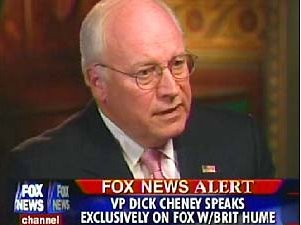 Good news and news that's a complete crock of shit...

CORPUS CHRISTI, Texas - The hunter shot by Vice President Dick Cheney had a normal heart rhythm again Wednesday and was doing well, hospital officials said, as Cheney prepared to speak about the incident publicly for the first time.

Cheney was to appear on Fox News Channel at 6 p.m. EST, the network and the White House announced.

Harry Whittington, 78, a Republican supporter from Austin, was hit in the face and chest by birdshot Saturday and was in stable condition Wednesday after suffering a mild heart attack when one of the pellets in his chest traveled to his heart.

Hospital officials said Whittington had a normal heart rhythm again and was sitting up in a chair, eating regular food and planned to do some attorney work in his hospital room. He had had no further complications and was expected to remain in the hospital for about another week.

First, I'm glad Whittington is doing better and seemingly out of danger.

As far as Cheney coming out of seclusion to go before his Official Fan Club for a fluff job, that does not count as answering to the public or the press for his actions. How is that acceptable? He should be holding a goddamn press conference, or frankly, he should keep his pasty ass in his cave.

I suppose I'm interested in what he'll say, but "breaking his silence" after four days with a bunch of sycophants does not count as coming forward or being accountable for one's actions.

OUTRAGE UPDATE: This interview isn't even live. Cheney has already taped an interview with Brit Hume. A complete fucking joke.

FURTHER UPDATE: Here is the story at FOX News. To his credit Cheney is taking full blame for the shooting.

NEW YORK — Vice President Dick Cheney said he and he alone was responsible for a weekend hunting accident in which he shot Austin attorney Harry Whittington.

Cheney's first public response following his accidental shooting of a man in the face comes more than 72 hours after it occurred. The interview will be broadcast on "Special Report With Brit Hume" at 6 p.m. EST.

Oh, and FOX, by the time you air this "interview" 100 hours will have elapsed since Whittington was shot. today is Wednesday, not Tuesday. Can you even be fair and balanced with simple arithmetic? And the story repeatedly refers to "BBs" in Whittington, even attributing a hospital official, Peter Banko, as using the word "BB" in a quote. I have not seen ANY other account that uses the word BB in place of pellet. Did FOX change the official hospital statement to match their strategy of minimization?
Posted by Mr Furious at 2:53 PM

A I mentioned in a post, I'm quite sure there's more going on with this Fox appearance than mea culpas and explanations about the shooting.

Hint: think all politics, all the time, plus a whole lot of CYA.