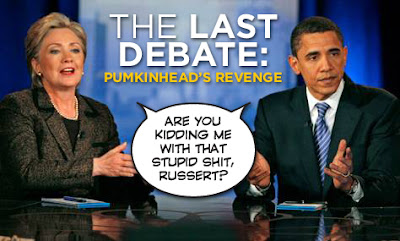 Last night was the final debate between the Democratic candidates and it went just like the last few...Obama has closed the gap on what used to be a big advantage for Hillary—debate setting vs public speaking. He came off well, fought off some ridiculous gotcha questions from the excreable Tim Russert and looked pretty damn Presidential. Hillary also did a great job telling Russert to STFU when deserving, avoided saying "Day One™" and had some typically strong moments—she is good in this format—but she had some big missteps. She needed a game-changer and didn't get it.

We did a Debate Couch (live-commenting) at Toast's if you want to read our witty repartee, but the best thing I've read on last nights debate is here. Click, you'll be glad you did.

UPDATE: A good piece on Russert from last fall [link], and why he's a terrible choice for a debate moderator.
Posted by Mr Furious at 9:37 AM

Labels: debates, hilarity, Hillary, links, Obama, pumpkins sure grow big in Buffalo, telling you what to do

There are just too many good lines on the Moonshine blog to point out just one. It captured the debate flawlessly.

I like their transcript better than the real one.

Indeed, that transript is terrific stuff. Thanks for alerting Rickey to it's presence.